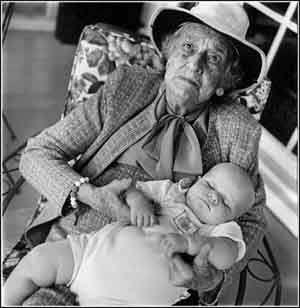 It's not uncommon for a common type of snob to thumb his or her nose at the notion of "anthology," be it an anthology of modern American poetry (ah, Norton) or an emo-themed mix CD. I've never really held that attitude, preferring instead to just be thankful that there are people out there that have a passing interest in poetry at all.

Same goes for visual art: Retrospectives are cool, but so are the museums that host them. Recently, however, I happened across local photographer Bill Emory's website, Black and White, which is basically an online gallery—or ongoing and on-growing retrospective, if you will—of his work.

Since March 2005, Emory has been posting his photographs daily. The majority of the photos are black and white, and scrolling through the months and years of work I felt like I got to know—intimately—both Emory himself and the people in his life: his neighbors in the Woolen Mills, his twin daughters, his dog, Sophie. It's a website that, as you make your way through it, you actually begin to see the world through someone else's eyes. (Who knew that's the superpower art fosters?!) The experience is simultaneously eerie and fascinating and beautiful. "Beautiful" thanks to the photos themselves, on a purely aesthetic level.

Examining Emory's website, I finally understood the benefits of that old notion of having everything in one place. There's a story to be told that no single sentence could sum up. It's not that I think anthologies or mixed CDs or museum collections are any less cool than I did yesterday: I just understand the desire to anthologize a little bit more.-
Nell Boeschenstein, Shades of gray

Bill Emory's work is a mixture of well-done documentary, decisive moment and poetry. His images are straightforward and mysterious at the same time, and the sometimes poetic accompanying text enhances that feeling. -Mason Resnick i had a great half hour looking at your shows. i agree about the thumbnails. i like clicking through them, right on the picture. i like the idea of narrative. the web is a great thing for your work. not only does it broadcast, but it animates. -Bear

I've come to believe that the best portraits don't necessarily show you what somebody looks like, but they tell you what somebody is about. It is, I believe, the ability to show what something feels like, rather than what it looks like. You have that talent. -JR


I must admit however, that the story about April was my absolute favorite. I am three dogs old and have always looked at my life too in "dog eras". I had a GREAT dog die of old age in 1996 and when she did that 15 year time span that she was my closest friend was gone too. Another era had passed... But tonight I got to relive, just a little, my life with Blue. Thanks -LB

I wanted to express my heartfelt thanks to Bill Emory for his story and photos in the Readers Write section in the August issue of The Sun.This issue arrived just before my beloved dog Chloe slid into a steep decline after struggling with advanced lung cancer for more than five months. I have never before faced making a euthanasia decision, and Bill's story and photos were just what I needed to guide me through this extremely difficult time. I read it over and over before deciding on August 25th that her eyes were saying "Let me go." Thanks also to The Sun for publishing this piece and so many others that speak to my heart.

your Web site, it looks great, and it loads really, really quickly!...David

Beautiful, interesting, life oriented pictures. Enjoyed this adventure. I will definitely come back to your site.- Grace

These are the sort of photographs I've dreamed of taking ~ probably never will but they make you sit, and really look into the photo - found myself smiling and then felt sad with a few.Well I wont gabble on anymore. Just wanted to say wonderful work !! Regards

I am sorry I have not looked at your pictures until now. You have told a compelling story with a good idea of how the camera describes the common vagaries of the world. And I admire your statement, "I take photographs, I will take photographs. Validation and Redemption are uncertain, time, light, loss and longing are not. " I can relate!!! All the best, your fellow "fixer of shadows". Bill Mattick

Just an email to say how much I have enjoyed your website: it reminds me of a time when I lived in your country (down in Georgia). Inspired by Larry Fink, Mary Ellen Mark and pure school project spirit, I grappled with the new people and landscape - engagement is the word I am looking for. Professionally a very tough time, but I got to know the area quite well.
Anyway - although I haven't been digging in the shadows as long as you, I have learned about conviction - which I see in your work - and late at night, in front of my computer that seems very important. Thank you for sharing it with us.

I stumbled across your site while looking for images relating to 'driving at night', I'd been looking for inspiration for my current project examining the Australian landscape.
I'm an Aussie painter living in NYC and just wanted to say that I think you have a singular eye and feel for the edge of life, your work is like a beacon. I don't know what I'm trying to say but I feel your work teetering on the edge of the void between life and...well, death really.

If you like good childrens pictures, the take a look a THIS link. Bill Emory's every-day photographic awarness being around two sisters growing up is one of the most touching and beautiful places I have seen on the InterNet. Pride from within. No glamour, nothing fancy. Just life, as simple yet complex as in Real life. Mr. Emory communicates something through his pictures that grabs hold of something in me like nothing else. There are other galleries on this site with the same presence and naked truths as well. Both "time" and "a photo prayer" left me thinking more than any religious anecdote ever did or ever will do again—Henning Jansen

Note: I am in search of a publisher. I wish this was a book that could rest in your lap, no batteries required. Do you know a publisher? A book agent? Do you have a mole on the inside at Twin Palms? Call me! 804-462-9968 .